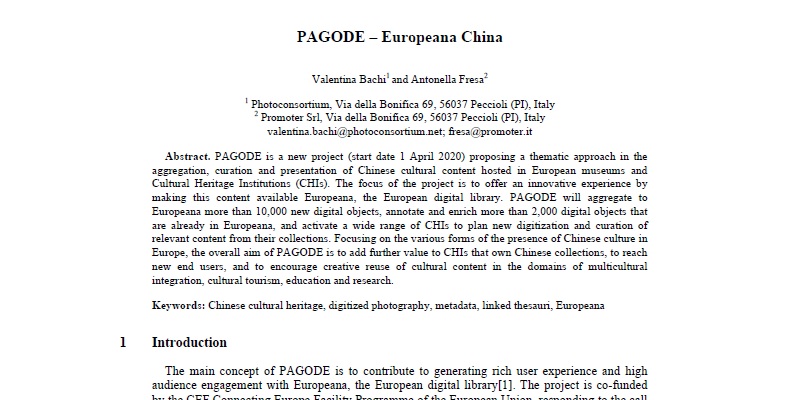 EVA Florence is an annual appointment, that started as a small workshop in 1991, then becoming in few years a well-defined conference in the EVA (Electronic Imaging & the Visual Arts) international series. Due to the covid-crisis the conference has been turned into a videoconference to be held on 20th July under the coordination of the University of Florence, professor “emeritus” Vito Cappellini and professor Enrico Del Re.

PAGODE – Europeana China presented a paper that will be illustrated in the afternoon session “Access to the culture information”.

image from the paper The PAGODE Semantic Workshop is organized by the project team at the Department of Asian Studies, University of Ljubljana. Its aim was to set the common ground for the curation of Chinese cultural heritage in the Europeana Digital Library. The workshop was held as an online event on Zoom on 9-10 July 2020.

The purpose of the PAGODE Semantic Workshop is to discuss the semantic background and the metadata curation methods of the already existing as well as newly added China-related content in Europeana. We took this occasion to review the definition of Chinese cultural heritage as well as discuss the list of keywords and use of thesauri that are developed within the Activity 3.1. of the PAGODE Project.

Above all, the workshop gave the participants the opportunity to tackle specific problems arising from the practical application of semantic definitions and of the metadata specifications. The project partners and the associated content owners were invited to present the material that is difficult to categorise or otherwise problematic as related to specifications.

Ultimately, the PAGODE Semantic Workshop provided the means for an improvement of the existing metadata scheme and enable further development of methodological approaches.

img. courtesy Department of Asian Studies – University of Ljubljana plus shots from the Zoom sessions 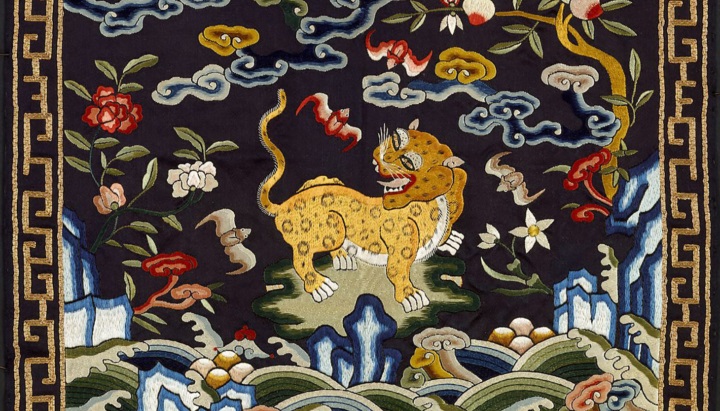 Being so deeply embedded in the Europeana ecosystem, PAGODE – Europeana China fully embraces the advocacy towards more open access content to be made available online in repositories like Europeana. The effort of cultural heritage institutions in showcasing their gems in digital format goes hand in hand with their mission of sharing this cultural heritage at large, for the benefit and enjoyment of the entire community.

Also, the general trend in Europe about digitization of cultural heritage and associated rights comes from a lenghty discussion that is continuing for years: does the digitization action add new rights to the digitized object? Despite there is not a general consensus on this, the direction is on maintaining the rights status of the physical object also in the digital instance, and specifically this means that if an artwork is in Public Domain because of copyright’s expiration, also the digital reproduction should be labelled as “Public Domain”.

Irrespectively of the associated rights, however, there is always a problem of possible misuse for this content that is available online and easily downloadable. And while in our minds there is this idea of the “evil” user who breaks copyright on purpose, and stoles the images to e.g. make unlawful money out of them, the problem on the control of what happens to the online content is much deeper.

An example of this, that particularly catched the attention of PAGODE – Europeana China because it relates to a Chinese cultural heritage item, has recently come to the stage: a beautiful image of a Chinese embroidered cloth (a so-called rank-badge) depicting a leopard, in PD from the Metropolitan Museum of Arts, was recently used to illustrate the cover page of the Centers for Disease Control and Prevention (CDC) Journal, titled “Emerging infectious diseases”.

The Journal and CDC were immediately flooded with expressions of outrage and concern of many from the Asian-American community and beyond, at the inappropriate use of a Chinese work of art on the cover and tweet-posting of a journal issue devoted to scholarly articles on COVID-19 and other respiratory infections.

The power of imaging should not be underestimated, as the choice of this image in such a context may suggest an emphasis on animals in China as carriers of the disease, resulting in an unvoluntary but certainly irresponsible example of using a PD digital item. The sensitivity about associating the COVID-19 crisis straightforward with China is clearly understandable, especially in America in this moment of xenophobia concerns and protests; but the explaination of CDC cuts short, by stating this is all a misunderstanding, and simply confirming that the image was chosen just for decorative purposes, being a striking piece of art – as indeed it is. At the moment, no reaction is known from the Metropolitan Museum of Arts as the content holder of the misused digital image.

The entire story is deepened in an interesting article by Hyperallergic magazine.

But the question about protection against digital content misuses is still very open. It is not always a matter of  whom makes money out of the content, but more of what happens to the content once it is freely available for “any” purpose.

While advocating the open access approach, we really must think that the content holder completely loses any control and responsibility on the reuse of this content, and on the possible consequences that may arise. This is one of the many reasons for which some archives still have doubts about embracing the open access tout-court, especially when they deal with potentially-sensitive content.

China has a long and influential musical tradition based on the philosophy and culture of ancient China. The Confucians embraced a correct use and form of music matching to sociological and cosmological conceptions, thus to discover traditional Chinese music helps understanding Chinese culture. Unfortunately, there are still a number of barriers to online access for audio and audio-related materials, including the need of appealing content display to support user-friendly search and engagement, which is a difficult task also in physical museums. Efforts are ongoing to make this content more widely shared and accessible, such as the dedicated Europeana Sounds collections and the very specific materials disseminated in the UNESCO in Intangible Heritage platform.

Inscribed in 2008 on the Representative List of the Intangible Cultural Heritage of Humanity, in the UNESCO repository we can discover about the Guqin, the Chinese zitter: this musical instrument “has existed for over 3,000 years and represents China’s foremost solo musical instrument tradition. Described in early literary sources and corroborated by archaeological finds, this ancient instrument is inseparable from Chinese intellectual history.” As a demonstration of a different approach to music, guqin playing was not intended for public performance but it was more a personal art, that – along with calligraphy, painting and chess – Chinese scholars and noblemen were expected to master. “According to tradition, twenty years of training were required to attain proficiency.” it is explained in the UNESCO website and “Nowadays, there are fewer than one thousand well-trained guqin players and perhaps no more than fifty surviving masters. The original repertory of several thousand compositions has drastically dwindled to a mere hundred works that are regularly performed today. “

image: © Chinese Academy of Art sourced from the UNESCO website.