Have you ever wondered what it is like to restore a 500-year old scroll? Then keep reading! In this post I hope to give insight into the process of the conservation of the Leiden University Library’s most recent acquisition for the Chinese special collections: The Ming Imperial edict.

When the edict arrived it was in a fragile condition. The edges were severely damaged with a few tears on the top and bottom, and from the top of the scroll some fabric was missing. The nature of the damage could indicate that the rolled up scroll could have been pressed flat due to its rigid supporting core being lost, which would have caused these vertical cracks [Photo 1, 2].

The previous owner Robert van Gulik’s youngest son, T. van Gulik, has told me that his father stored his scrolls in drawers and occasionally rolled them out to study them. When the scroll arrived it was being kept in a tubular container, but for conservation purposes the diameter of this container would be too small. It would cause tension on the original material. A further concern was that we want both sides of the scroll to be accessible for future research. How can the damage be fixed?

To answer that questions we need to weigh in all the factors. The edict is supposed to be rolled up; do we want to keep that aspect intact? What do we lose if we don’t? What do we gain if we do? Because of the nature of the edict’s damage the material needs to be supported to halt further deterioration. Due to the fact that the edict has valuable content on the front and the backside the conservator decided to use ‘tule’. Tule is a see-through silk mesh that allows viewers to see the original item and gives them the ability to roll up the scroll [Photo 3, 4].

Another option would have been to adhere a thin supportive layer to the backside of the scroll but this would impact the visual access. The most suitable method for storing items after conservation would be to keep them flat.

If some parts of the objects have been lost, they are gone: It is not necessary to ‘fill in’ what is missing, that is for other researchers to decide. The key question for us was: what kind of expertise was most needed to work on such an old and delicate piece of textile? Although the edict contains text, it is not a regular document or manuscript. Because the writing substrate is a fabric, a textile conservator was consulted for the edict’s conservation. Sjoukje Telleman, a young professional, advised us and treated the edict.

I imagined it would be vital to understand the Chinese language to be able to conserve this edict. But when I discussed this with the experts we stumbled upon a common misconception of the conservator’s profession, namely that conservators try to restore an item to its original state. I learned that the conservator’s job is much more to preserve the item rather than to repair it: maintaining its current state, safeguarding traces of historic use, and stopping it from deteriorating further [Photo 5]. This will help ensure that the objects can survive the test of time!

I hope that this rapport has given some insight into the conservator’s profession! I, for one, learned that my initial question was wrong. It shouldn’t have been: how can it be fixed? But rather: how can it be conserved!

An online symposium, inspired by a rare museum object, a late 19th century missionary scroll from the Regional Museum of Celje, Slovenia. The scroll, which has been kept in storage since its confiscation from an unknown owner in 1940s is now finally restored, digitalized, and further developed into an online presentation. It will be physically put on display in the museum for the first time this May 2021 along with other Asian objects from the same collection.

As a scholarly part of this exhibition, an online symposium will take place on May 20th and 21st. The symposium will be divided into three subtopics:
– Catholic missions in East Asia and related collecting practices
– Jesuits in Shanghai, Xujiahui and Tushanwan
– Missionary collections in Slovenia and the 1945 confiscation

PAGODE – Europeana China is making an impact on education, being included in a students project for the Master in Cultural Studies at KU Leuven. The organizing students of this “PAGODE group” are Gelan Cen, Lilia Chalakova, Shau Zou Fong, Jing Yun and Emily Jayne Benson-Kallman.

The project includes two elements, a video competition and an annotation sprint of digital collections. Both tasks are based on PAGODE’s crowdsourcing campaign launched in Autumn 2020, where a wealth of images about Chinese Heritage cultural collections, sourced from Europeana and carefully selected by PAGODE’s curator Sofie Taes, is available for users to play with.

In the video competition, participant students are expected to select one, several or a series of pictures from the Scenes and People from China campaign in the PAGODE crowdsourcing page and explain the reasons for their choices by recording a nice video to be shared on social media. The videos will be evaluated by an independent jury basing on a detailed evaluation system, to award the nicest one.

In the annotation sprint, participant students will be challenged to join the effort of annotating and curating photographic materials about Chinese culture that are currently published in Europeana, by looking at the images and adding descriptive tags selected from controlled vocabularies. Each addition counts points to the user, who is ranked in a lively classification of top-scoring. The student who will have reached the higher score will be awarded as the winner. The annotation sprint will be open until 22nd of May and the overall target is to reach 24.000 annotations. Afterwards, the annotations will be reviewed and validated by PAGODE experts and then sent to Europeana for publication.

The organizing students of the “PAGODE group” say “We are expecting to hear different voices from Chinese culture lovers by offering a unique opportunity for you to have an inner conversation with yourself. Every participant, in this case, can be recognized as a citizen historian who makes substantial contributions to safeguarding the memory of their past and paving a promising path for the future of their ethnicity. We hope, by holding an interactive and engaging event based on social media, we will be able to send the message that it is interesting and fashionable to talk about cultural heritage. Every piece of cultural heritage is a vivid and faithful reflection of daily life in the past. Therefore, people should be handed the power to share what they think about a particular cultural heritage and why they feel related to it.” 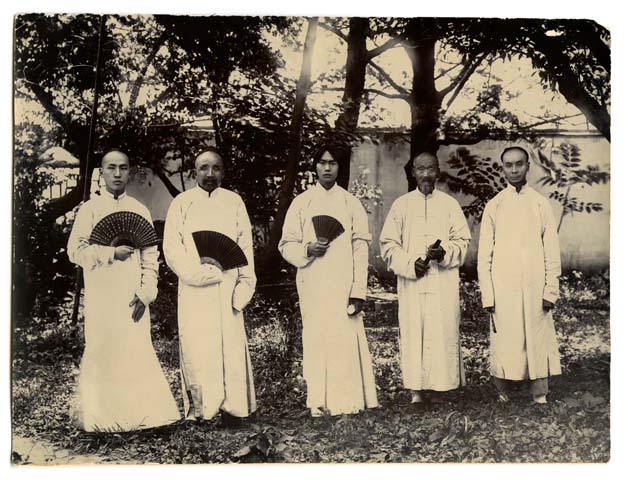 PAGODE Digital Festival is proud to present an online talk and presentation to discover the collections of the Finnish Missionary Organization at Finnish Heritage Agency.

Ismo is Chief intendant of the Picture Collections at the Finnish Heritage Agency (since 2012). Studies in History, Archaeology and Museology, University of Helsinki (MA). Museum professional since 1999 and long experience in many fields: museum collections, collection management, exhibitions and since 2009 developing and coordinating the digitization of collections. Member of Photoconsortium and Vice Chair of the Finna Consortium. Finna is the national platform for millions of items of cultural and scientific material in Finland.

DISCOVER ALL THE EVENTS IN THE PAGODE DIGITAL FESTIVAL >>>

PHOTOCONSORTIUM, International Consortium for Photographic Heritage, and EUROPEANA, the European Commission’s digital platform for cultural heritage are proud to present a prime accomplishment of PAGODE – Europeana China. This project, aimed at creating a dedicated thematic space that highlights and celebrates Chinese heritage in Europe, officially launches a feature page on April 4th, showcasing a variety of Chinese and China-related cultural heritage items and resources from European cultural institutions such as museums, libraries and photographic archives.

“International exchanges have been and are still at the basis of the evolution of our society. In particular, this is true in the relationships between Europe and China. While goods are moving and determining the economic values of these exchanges, people move with their ideas and cultures. Mutual understanding and acknowledging the value of the variety of cultural heritage in the world is key to support the creation of healthy spaces for business development.” says dr. Mauro Fazio, Italian Ministry of Economic Development, the PAGODE project coordinator. “Digitisation, curation and access to digital treasures of Chinese heritage held in European institutions, as the main objectives of this project, are expected to contribute to the process of digital transformation in the light of a more inclusive, equal and global growth.”

Jolan Wuyts, Collections Editor at Europeana: “In Europeana we have the opportunity to highlight collections that can be otherwise underrepresented, showcasing Chinese Heritage in European collections is one of those opportunities. The PAGODE project enables users to dive into Chinese heritage collections while at the same time being guided by important context and curation from PAGODE project partners. Collecting these editorials in a single feature page allows Europeana to give a platform to PAGODE’s curation efforts and other editorial on Chinese heritage in one place.”

Themed galleries, blog posts and curated  digital content will guide visitors through  this online treasure trove. Image by image, story by story, visitors can  immerse themselves in the rich narratives of two worlds that have been meeting and mixing for centuries. The feature page will offer ample opportunity for discovering the stories of Empress Cixi, of the mandarin duck, of the Chinese junk, and exploring thousands of curiosities and stunning images of Chinese heritage in Europe. To be added to the page in  September 2021 is a virtual exhibition of Chinese heritage and art in Europe.